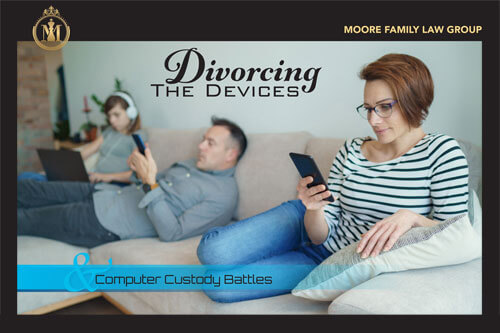 Prior to the Covid chaos, we already spent too much time on our phones or in front of the laptops and tv’s. With so many social media options, selfie apps, the Netflix and Hulus and other streaming entertainment, there are just too many ways to bury yourself in a screen.

As a parent, we constantly tell our kids, get off the laptop, put your phone down. Toddlers are more familiar with a smartphone than a Mother Goose book. Most three-year-olds know how to operate the latest and greatest iPhone, Galaxy or tablet.

Cute Memory of Everyone: Remember, when the little one made that first swipe and tapped the correct icon on the cell phone with their precious, tiny fingertip and we were so proud? Then, just days later, they knew how to “skip ad.” We all thought we had a genius on our hands. MIT here we come! Fast forward one month, the freak-outs and tantrums began because kiddo wants their YouTube to watch cartoons or stream SpongeBob — but no, you need it to answer an email, or you’re in the middle of a serious text conversation, or in a Facebook chat fight. Let the battle begin between you and toddler-techo.

Let’s face it, the cell phone is the new pacifier. How about this scenario: You’re in the bank or in a doctor’s office waiting room — you find seats, reach in purse, hand over phone to ensure child silence. Can you relate? Then, your little techos become middle schoolers and high schoolers and all you see is the top of their heads.

iPhone at the dinner table, iPad in the backseat of the car. Electronics overload but not just kids, parents too. Adults are just as guilty. Passenger parent on the cell, driver using navigation or speaker phone. Does the back of your headrests have tv’s for the kid in the car seat, or vehicle has wifi?

As a spouse, do you pull down the sheet and blanket, slide into the bed at night, lean to the nightstand, and grab something? Not an Altoid or lip gloss — but your cell phone?

Then look over endearingly at your honey whose already in bed hypnotized on the iPad? It goes something like that, right? Even if we are reading, it is likely a kindle or on the phone. Paper or hardback no more.

How many times did you go to a restaurant (when that was a thing) and look at the tables around you, and every person, even if just two, were looking down at their phones? Then you made fun because gosh they don’t even want to talk to each other. Turn, look down and your kids are on devices with ear buds. Nowadays, combine all that with wearing a mask. It’s The Twilight Zone. 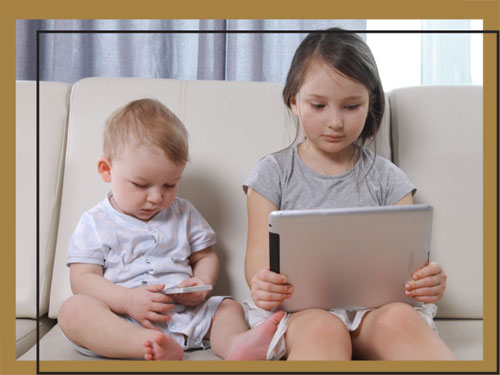 Given current circumstances, our kids are forced into distance learning, which means MORE screen time and I’m sure apple is ecstatic and will be coming out with a new iPad soon enough perfect for virtual classes and bedtime videos. (As I write this, I have learned there is a Galaxy S20 now. A 20?! (I feel like I just purchased the S10!))

Such is the times, but I can assure you, no matter the instant gratification electronic devices bring (to kids and adults), it definitely has a negative impact in the family dynamic.

Why? Think of the time you could be spending with the kids instead of answering work emails and texting.

Is all that time on Facebook and Twitter improving your life, or relationships with your kids or significant other? How’s your mental state of mind after a long FB session? Do you spend more time posting selfies on Instagram than sorting Lego or brushing doll hair? Sadly, so many parents are guilty of this. You are not alone if you do it. Don’t think kids don’t notice this though. It is a license for them to do it too.

As a parent in the digital era, it’s hard to live by, ‘do as I say, not as I do.’ Your kids will call you out in a tech sec. (That’s really fast!) They notice when you put the phone down. They will even comment on the separation of hand and phone. Little ones love attention more than candy. Give it to them. Note: If you are in a real family law custody battle, this behavior by a parent will come up.

Now, let’s address hubbies and wifeys on electronic deviceys. Imagine the bonding that can occur when you share what little time you have together, even if kids are running in and out, jumping on and off the bed. You can catch up, clear the air, pillow talk, play with the kids, talk about anything but more importantly — listen.

Also, there is no bigger time suck than social media. It is also a way to put yourself into a mental mess with all the negativity and bad news on your feed. If you take that to heart, you take that to bed. There was a time when smartphones did not exist. It was a good time!

Taking to social media has also created unhealthy habits, leads you down rabbit holes, wasting time, money, and inserting yourself where you shouldn’t be. For some that is middle of night shopping or tipsy tweeting. Facebook is notoriously the e-motel for laptop rendezvous. A person thinks talking to this old flame isn’t going anywhere until, well, it does. It was just a “like” on a pic that led to a DM that led to, well, you get it.

The average user spends about an hour per day on the Facebook. With the combination of all the social media platforms, reality becomes skewed for those who get sucked into fantastical photos and conversations with other people. Rekindling old flames because “I could relate” to that person.

In 2014, one-third of UKs divorces cited Facebook. Facebook is a form of fantasy. There are some whiners and complainers, of course. You know the kind — it’s too hot, it’s too cold, call the wambulance — but the majority of posts are, “I’m so awesome! Look at my legs in front of the pool on a Thursday afternoon with my cocktail and fresh pedi.” Or “I’m so fit here’s a gym selfie,  you fatties.” And there are no footnotes that say, “At the pool mid-day because I am unemployed right now, or filtered the heck out of this pic/fake sweat.” It’s a skewed reality and it can be dangerous if you are already in a relationship teetering on unhappy or bored. It’s easy to “connect” with a hot profile pic from 20 years ago that posts funny memes.

This article isn’t intended to be about e-infidelity but it’s definitely a potential harsh side effect of too much device time. They can be addictive, can warp your perceptions and create negative head space. Spending too much time can weaken what is right next to you, make you feel like the person in the post “must have everything.” Look, it’s a lie, an optic. Nobody posts their messy house, their make-up free pimple face, the numbers on their scales, their hairy back or cellulite. Celeb selfies aren’t even real, and they really do have it all! Put the phone down and live in your reality. If you don’t like it, staring in your phone or other device doesn’t fix it. In fact, it hurts it. (Unless you are actually reading or in classes about personal growth, parenting, or professional development. Then carry on!) Your significant other will love some extra TLC, your kids will love some more play time, baking time, pool time, or outdoor time.

Most people say they are not ready for a divorce. Your phone does not care about you. It doesn’t love you back. Let it go. I’m no licensed therapist but a one-sided relationship is lonely! Call it quits!

As for the kids, you should consider the devices their enemies. Separate them before one gets hurt. Take custody and offer reasonable visitation of electronics. They will surely be mad at first but nothing a little rehab won’t cure.

If you can’t go cold turkey, first shift your mentality away from the faux FB to just some limited fun device time you can share with honey or the kids. Play a card game or trivia always offers family fun. Then ween off little by little. There is a setting on the phone to shut off every application after X number of minutes on that app. Set for an hour and the app closes and locks you out in an hour. Use this feature on the kids’ devices too. Moderation is key like ice cream and peanut butter cups. Be the example and set limits, or feel free to jump right into a complete separation. If you’re a woman, it’s heels and bra off after work; and if you’re a man, it’s falling into the lazy boy after a long day. You will not regret how liberating it is. Divorce the device and take custody of computers.

Our FAQ section is always a real question or scenario, we hear from clients or during consultations. We typically provide our readers some type of legal response with details of the law and/or examples of what to do or not to do.

Our answers also make the reader do some critical thinking about themselves and their actions. However, this time famous talk show icon, Johnny Carson, may offer the best answer to this common question!

Q: What is the difference between divorce and legal separation? 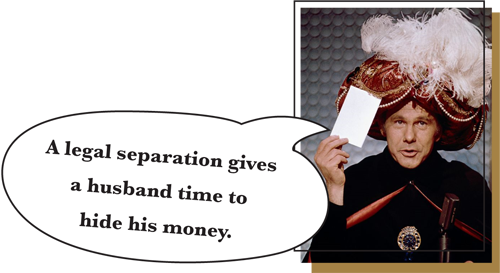 Call us to get some real advice because making this decision between divorce and legal separation can be funny, but usually it’s pretty important as Johnny humorously points out! (951) 463-5594. 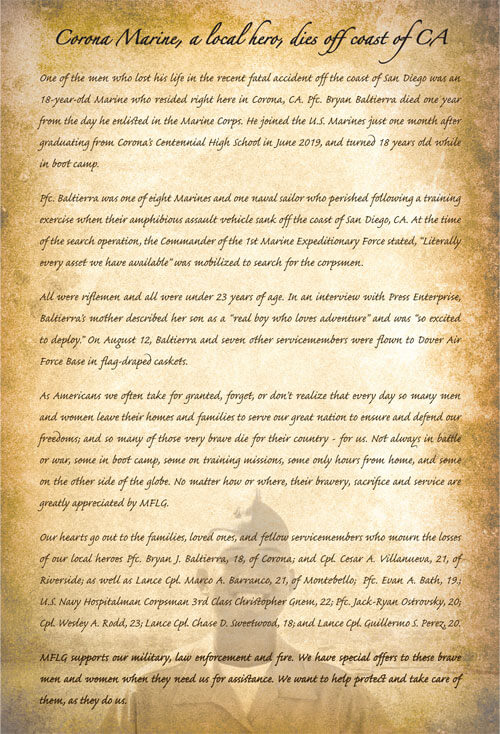 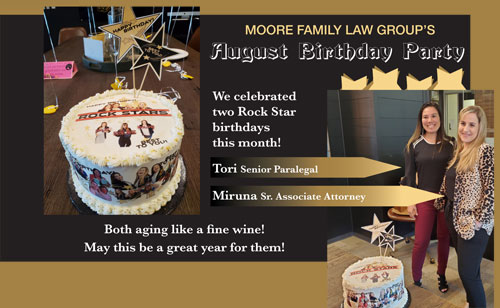