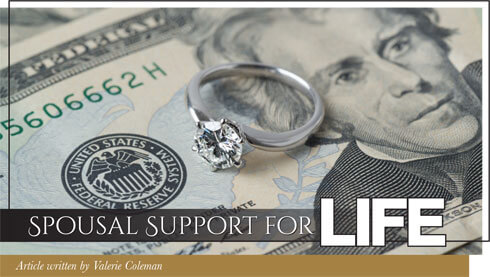 Spousal Support For Life? What??

You’re contemplating divorce and you have heard all the scary stories about paying your spouse “alimony,” now referred to as “spousal support,” for the rest of her life.

Here we offer some insight into the possibilities

The answer to question one above is, yes, it is possible. The answer to question two is maybe, if we are figuratively speaking, but how much do you value your future happiness? If you have reached the point that divorce is what you want and/or need to live a happier more fulfilling life, can you put a dollar amount on that? What is the value of a peaceful future, a renewed well-being, a positive spirit?

Divorce is hard — I’m not minimizing that. It’s a difficult decision to make. It takes time to heal. Some at a faster rate than others. It is an emotional roller-coaster and a stressful process, and you can add lots of other negative adjectives here. You have taken the time to read this far so divorce is something you are likely considering.

So, what are the chances you are that guy who will pay FOR LIFE?

The bells and whistles… or maybe fireworks

When a husband and wife hit their ten-year wedding anniversary, that is when the bells and whistles (or fireworks) go off. You don’t really hear or see them, but congratulations, you have officially become a long-term marriage! Really, congratulations! The average marriage in the U.S. is eight years (per U.S. Census). The country’s divorce rate continues to be over 40% and each subsequent marriage is even higher. (Second marriage: 60%)

When your wife requests the court to order you to pay spousal support, there are many factors the court must consider before ordering permanent support.

Permanent, as in forever, or like the hair do?

Permanent is defined as “until death of either party, remarriage or registered domestic partnership of the receiving party, or further order of court.” Those last four words can be beneficial to a spouse ordered to pay a permanent support order. We’ll get back to that.

Longer than your honeydew lists!

As I mentioned before, the court must consider many many many factors for permanent support. In legal terms, Family Code 4320 factors. In plain terms, a laundry list of circumstances from pre-, during and post-separation, i.e.: 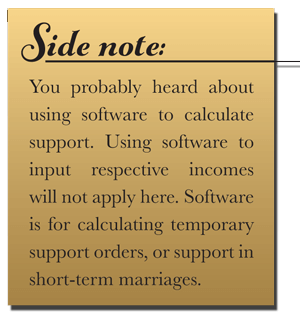 After consideration of all of the above plus even more, it is at the judge’s discretion how much support you will be ordered to pay. This will usually occur after a day of trial on the issue. Yes, an actual trial in an actual courtroom; judge on the bench, bailiff in the corner of your eye. No, it’s not like on TV. Those law shows are never accurate. Don’t get me started.

Can’t I Just Google It?

A seasoned attorney focused in family law can argue each and every factor for you. Trial is fast paced, under pressure and you do not have the luxury of time to Google legal terms, YouTube “how-to” videos or learn from scenes from My Cousin Vinny. Did I just date myself ?

The point is permanent spousal support is not an issue you should litigate on your own. Each and every factor is well thought out and a strategy is wisely crafted, exhibits are gathered and submitted to the court to support your arguments. It is a complex process and takes expertise to get the best results.

Teach me the way, oh wise one

Part of the strategy is receiving the appropriate counsel to prepare you for trial but also to prepare you for after a support order is made. Recall those four little words — “further order of court.” This is a very important set of advice and planning especially for those reaching retirement age, or a significant
change of circumstance. 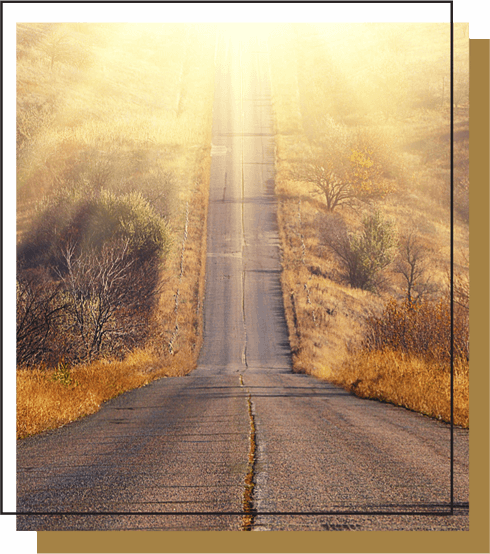 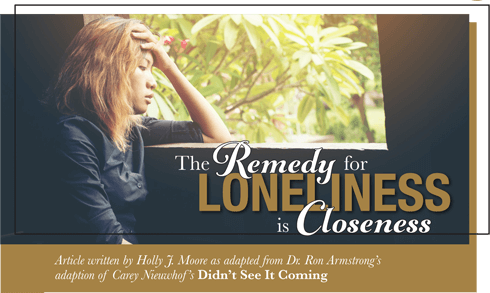 I have met with thousands of people who are contemplating a divorce over the years and on so many occasions I have experienced people who are very reluctant to divorce their partner even though the relationship that they have is extremely toxic, emotionally draining, and sometimes even dangerous. I always ask them what is their biggest fear in getting a divorce. The answer I most often get is that they don’t want to be alone in life.

I recently heard a statistic that even though today we have more ACCESS to people than ever before, people are reporting feelings of loneliness higher than
ever before. In a day and age where we can have hundreds if not thousands of
“friends” on social media, and we can connect with people around the country
or world with the click of a button, people are feeling very lonely, and that is not just people who are facing a divorce, it is all of us.

So when we are all so “connected” why do we feel lonely? And how do we remedy that feeling of loneliness? Keep in mind that we can feel lonely even if
we have many friends, or are surrounded by family. Because loneliness is not a
numbers game, it is a feeling. And that “feeling” as the data shows is certainly
not remedied by being “connected”. Connection is a convenience but it is not
a substitute for close relationships that help us deal with the tough times in life. Loneliness It is remedied by a feeling of closeness with someone.

The best representation is not just preparing you for the immediate but also
preparing you for what may occur later. Think of your life as a road map. Point A is where you are now. Point B is where you want to be. We help you draw your map, then get you to your destination – speed bumps, sharp corners, potholes and all.

Contact our office for a free consultation. Don’t allow issues like this to keep you from mapping out your future. https://www.moorefamilylawgroup.com/contact-us/

So how do you gain that closeness with someone?

Loneliness is not an indicating of failing, nor is it an indication of a flaw in ones personality. It is a feeling that helps us identify a need. Once the need is identified that is a call to action for us to take the steps to fill our need.

Need something to do with your kids for Easter?

Here’s a list of events going on in the Riverside County area! 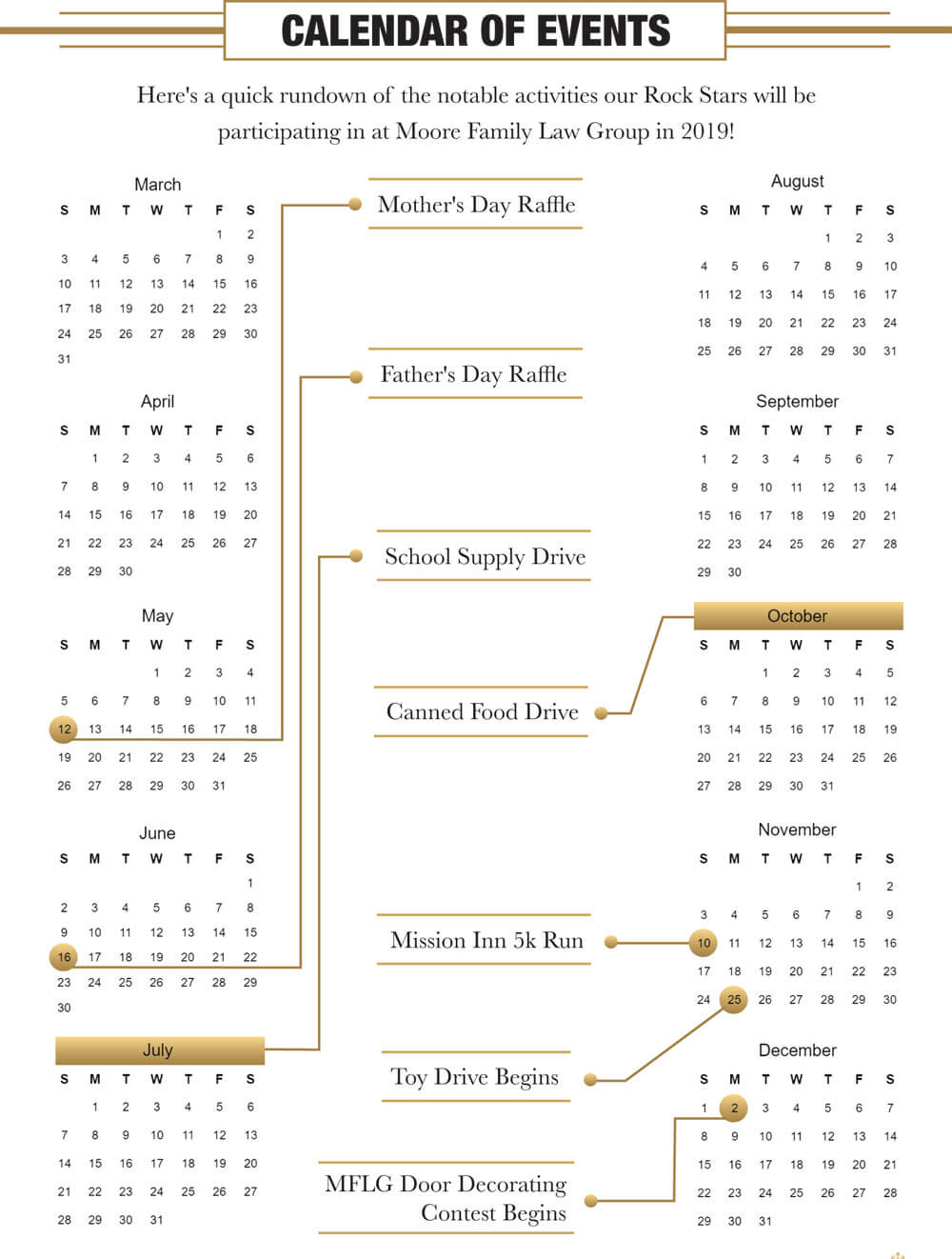